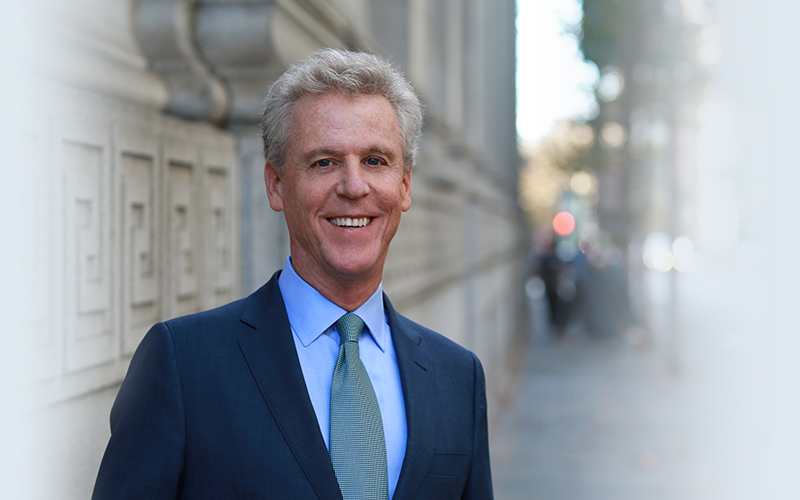 With more than 35 years of litigation and trial experience, Kevin represents businesses, public entities, utilities, and individuals in a broad spectrum of cases.  His practice includes matters in state and federal courts related to unfair business practices, trade secrets, real estate, ADA compliance, property damage and personal injury.  Kevin also has significant experience handling administrative hearings, as well as arbitrations before FINRA and the American Arbitration Association.  He is a long-standing “AV Preeminent” rated attorney and has been named a “Northern California Super Lawyer” for nineteen consecutive years (2004 through 2022).

Outside of his legal practice, Kevin is a court appointed arbitrator with the San Francisco Superior Court. He also volunteers as an adjunct faculty member for the University of San Francisco School of Law Intensive Trial Advocacy Program, and is a co-founder of the law school’s Douglas M. Raskin Scholarship.  Kevin is also a former appointed member of the Executive Committee of the Litigation Section of the State Bar of California, and he later served as an advisor to the Committee. Additionally, he has spoken on panels in numerous legal and business seminars and has lectured at the University of California at Berkeley.

Kevin was appointed in 2019 by former Governor Jerry Brown, and approved by Governor Gavin Newsom, to the Board of Governors of the California Community Colleges.  His appointment was confirmed by the California Senate.  The Board of Governors sets policy and provides guidance for the 73 districts and 116 colleges that constitute the community college system.  In addition, Kevin is a Member of the Board of Trustees of Calbright College, the first statewide online community college district.  He is also serves as Vice Chair of the Board of Trustees of his alma mater, Archbishop Riordan High School.

Kevin and his six brothers are fifth generation native San Franciscans.  He and his wife of 38 years continue to live in the City and it is where they raised their children. He enjoys paddle boarding on SF Bay and along the Pacific Ocean coastline, and spending time in West Sonoma County.